Mike Westfall (Westfall Loft) from Kearney (Missouri) winning US 97,000. - in the Flying D Franchise Futurity OLR, organized by Paul Daniel in Chico – Texas. The Flying D has a race within a race as there is an "A" and "B" prize pool with the birds being released together with the final race covering a distance of 400 Miles being released in Roswell. The "A-race" is the big payout with the "B" prizes being a consolation award. Right before the final, breeders pick what birds go in what race. As fate would have it, the first 3 birds’ home would be in the B race. When the 4th place bird arrived, the display showing that this was an "A-bird". The pigeon AU20-Imoi-0766 "Lot Lizzard" from Westfall loft in Missouri won US $ 97,000 with this 1st prize in the "A-race".

The "Lot Lizzard" was bred from 2 original GFL - Mike Ganus pigeons. The father GFL2019-47 was bred out of "Euro Magic" - NL13-1801202NL13-1801202, direct Eijerkamp, and direct son of the legendary Euro"Euro" when paired to "Vivian Diamond", full sister to Olympic Vivian"Olympic Vivian". "Euro Magic" in this, was paired to "Sanjay", 1. Final South African Million Dollar Pigeon Race 2015.
The mother for "Lot Lizzard" GFL2014-90 is direct daughter of "Said in Spun Silver", 2. Final South African Million Dollar Pigeon Race 2013 when paired to the winner of the South African Million Dollar Pigeon Race 2013 "Untamed Desert" NL12-1231152NL12-1231152. This Eijerkamp pigeon is the only Dutch pigeon ever who won this legendary race as she was bred from Achilles"Achilles" x Schouderduif"Schouderduif". "Untamed Desert" became legendary breeding hen in the loft of Mike Ganus, she became a.o. grandmother to another 1st prize winner in the SAMDPR in South Africa "Laura is a big winner today".

Mike Ganus is an authority in the OLR races worldwide and many descendants from his pigeon making history by winning top prizes, high ranked ace pigeons and big money prizes.
With a few direct Eijerkamp pigeons in his breeding loft Mike"s major successes also gained in the crossing for his OLR champions with these Eijerkamp pigeons. 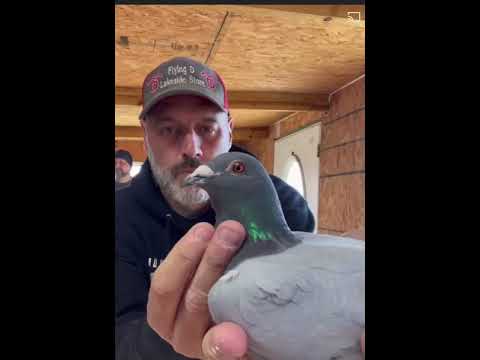